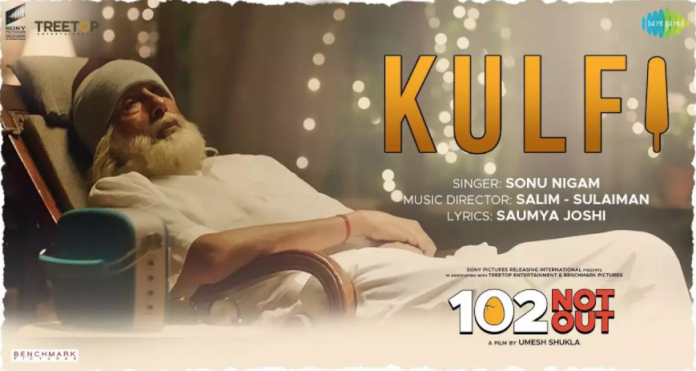 Kulfi is the latest song to be released from the upcoming Bollywood movie ‘102 Not Out’ starring Amitabh Bachchan and Rishi Kapoor.

In the latest song, we see a much more sensitive side to the movie and see the solemn and sad side of Rishi Kapoor’s character Babulal, who is seen reminiscing about his childhood after a fight with his 102-year-old father, Dattatraya.  The audience get a glimpse of Babulai’s childhood, as he realises that even though his father is crazy, he still loves and adores him.

The song is far from it’s meaning ‘Kulfi’ and isn’t as sweet as it sounds or looks. We see the sad side and shows longing and loneliness.

Kulfi has been sung by Sonu Nigam, and has been composed by Salim-Sulaiman. Saumya Joshi has written the lyrics, which uplifts the song.

‘102 Not Out’ is about a father and son who give a whole new meaning to love and family in this age-less comedy. We see Amitabh Bachchan play a 102 year old father to a 75 year old son, played by Rishi Kapoor.

The movie is due to be released on the 4th May.

Check out Kulfi from the upcoming movie below.