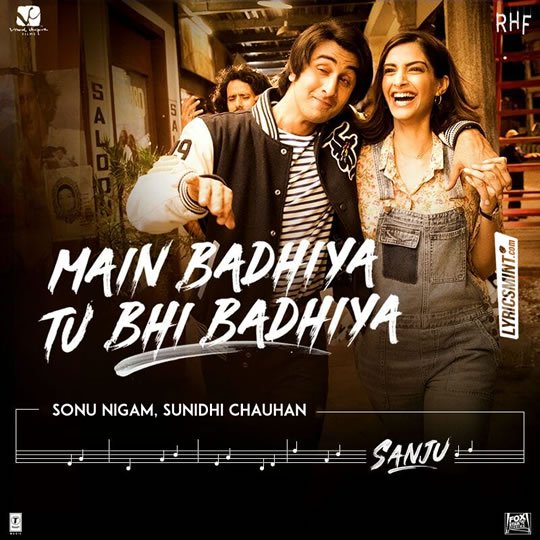 The song features co star Sonam Kapoor, who plays Ranbir’s girlfriend in the movie, and we see Ranbir lip-synching connivingly to go a women’s voice. This is because at the start of Sanjay Dutt’s career, his father Sunil Dutt doubted his son’s lip synching abilities. To prove his dad wrong, he sang along to a female lead track.

Set in the 1980’s, the song also features the quirky romance between Sanjay and his ex-girlfriend, who is played by Sonam. We see the pair singing and dancing around the streets of Bombay. Their chemistry will make you fall in love with the characters and you will get major nostalgia feels of the 80’s romance.

The latest song has been written by Puneet Sharma, with the music composed by Rohan-Rohan.

‘Sanju’ is a film based on the roller coaster life of Sanjay Dutt, where can get glimpses into his crazy and controversial life. The trailer has already received a lot of praise from Bollywood stars to Journalists, praising Ranbir Kapoor’s realistic performance.

‘Sanju’ is set to be released in cinemas on June 29th, in the meantime check out ‘Main Badhiya Tu Bhi Badhiya’ below.