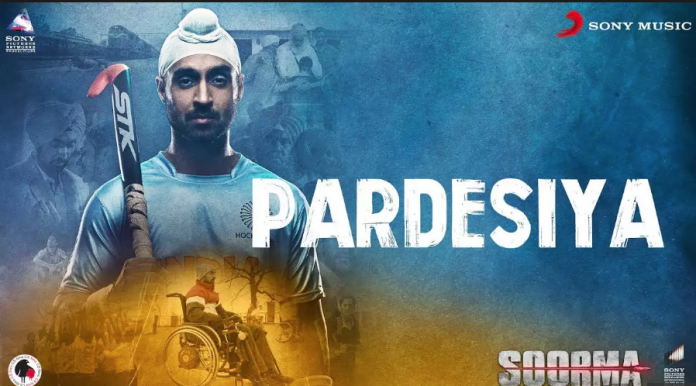 ‘Pardesiya’ is the latest song to be released from the upcoming movie ‘Soorma’ starring Diljit Dosanjh, Taapsee Pannu and Angad Bedi.

The latest song is every bit of powerfully emotional and haunting as you’d expect from the title of the song. It’s a heart-breaking song, which takes us on the inspirational story of Hockey legend Sandeep Singh, played by Diljit Dosanjh. It shows the struggle of the part in Sandeep’s life when he was paralysed, but fights extremely hard to recover.

The music is just as empowering, which has been composed by Shankar Ehsaan Loy, whilst the thrilling and compelling lyrics have been penned by Gulzar.

‘Soorma’ is an inspiring true story of the triumph of the human spirit, about a player, who made headlines for his unbelievable comeback after an unfortunate accident through sheer determination, hard work and unrelenting passion for the sport. The movie is due to be released in cinemas 13th July.