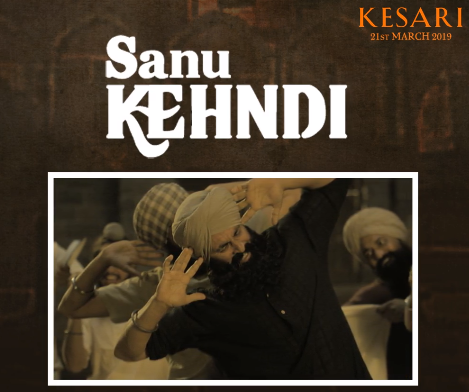 The makers from the upcoming Bollywood movie ‘Kesari’ have released the first track ‘Sanu Kehndi’.

The incredible trailer from the upcoming true story related flick, caught the attention of the whole of Bollywood and has already garnered over 30 million views on YouTube.

Lead actor Akshay Kumar took to his social media handles to reveal the first track from the flick:

‘Sanu Kehndi’ is an uplifting Punjabi song which has been sung by Romy and Brijesh Sandilya. The music of the track has been produced by Tanishk Bagchi, and the special dhol beats have been added to give it an authentic feel.

In the visuals for the track, we see Akshay having fun and dancing wtth the other 20 Sikh soldiers, who fought in the Battle of Saragarhi. The track shows a lighter side to the flick, where we see the soldiers teasing each other and dancing their hearts out.

In the moment, it makes the viewers forget the hardship the soldiers are about to face, and shows the true value of brotherhood and friendship.

‘Kesari’ is based on The Battle of Saragarhi took place on 12th September 1897. 21 Sikh soldiers, who were part of the British Indian army, were ordered to protect the forts of Lockhart and Gulistan, which bordered Afghanistan. 10,000 Afghan tribal warriors attacked the fort, but the 21 brave soldiers put their lives on the line to protect the country from their enemy.

Bollywood actress Parineeti Chopra will also be starring alongside Akshay Kumar in the movie. Catch ‘Kesari’ in cinemas 21st March!