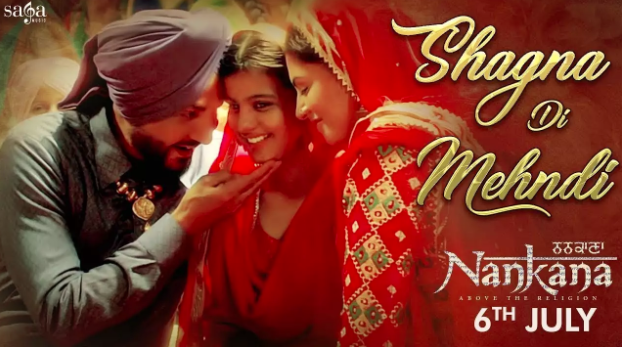 Shagna Di Mehndi is the first song to be released from the upcoming Punjabi movie ‘Nankana’ starring Gurdaas Maan.

The movie ‘Nankana’ has been building a huge momentum in the run up to the release of the movie on 6th July, and the makers of the movie have started to release songs from the soundtrack, which has been produced by famous Indian music director Jatinder Shah.

The first track which has been released is a soft ballad, that has been sung by the legendary Punjabi singer Gurdas Maan and Sunidhi Chauhan. The beautiful song is perfect and will be pulling on many heart strings.

The video for the song is equally as stunning and features Gurdas Maan, Kavita Kaushik and Anas Rashid, in a colourful Punjabi wedding setting and we get a glimpse of what to expect in the anticipated movie. We see Kavita adorned in a red Patiala suit holding a beautifully decorated thali in her hands. We also see Gurdas Maan sporting a purple turban with a matching purple kurta-pyjama. He looks every in regal wearing a luxurious gold necklace, getting his daughter ready for her marriage.

Check out ‘Shagna Di Mehndi’ from the upcoming movie below.