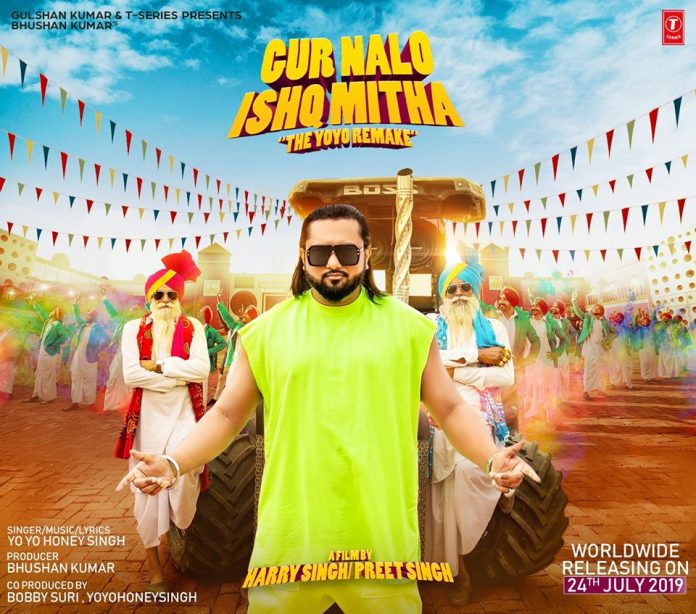 Indian rapper Yo Yo Honey Singh has collaborated with the one and only Malkit Singh for another remake of the famous ‘Gud Naal Ishq Mitha’.

After the release of the controversial ‘Makhna’, Yo Yo Honey Singh is back with another single, but this time it’s a recreated version of the huge hit of the 90’s, Gurn Naalo Ishq Mitha. Even today, the song is just as big as it was when it was first released, and the remakes of the track are endless.

It was only earlier this year in the Sonam Kapoor, Anil Kapoor, Rajkummar Rao starrer ‘Ek Ladi Ko Dekha Toh Aisa Laga’, where we heard another version of the song.

The original was sung by Malkit Singh and produced by UK producer Bally Sagoo. The video starred Malaika Arora and Jas Arora, which captivated the audience of many.

Unlike the other remixes of the classic Punjabi song, Honey Singh has used the original sound of the 90’s song, but has given it a modern twist. The Golden Star Malkit Singh is still part of the track, and brings back his famous vocals for the new beat.

However, Honey Singh has brought his famous rapping to the track that not everyone will agree with. It’s anticipated to be next big Bhangra song, and T Series are hoping it will make people hit the dance floor.

Speaking about ‘Gur Nalo Ishq Mitha’, Honey Singh said: “This is the biggest collaboration of my life. I was around 12-15 years old when I heard his song. Then Malkit Singh made a remix of it during my younger days.

I never thought I would be able to collaborate with someone like him. Around eight years back, he sang in my album International Villager but due to some reason, we couldn’t make a video of that song. I’m much excited that Malkit Singh comes in the hook line and shot with us for this song.

This is big thing for me. I’m sure everyone will love this old school-new school combination because we have kept Malkit Paji’s hook line as it is but the music, beats and my verses are very urban.”

In the music video, we see a Punjabi set, where the rapper is dressed in a bright and colourful Punjabi outfit, and joined by Malkit Singh as well. It’s vibrant and loud and full of Bhangra dance moves. There’s also special appearances from model Navpreet Banga and YouTube dance influencers BFunk.

Check out the track below!