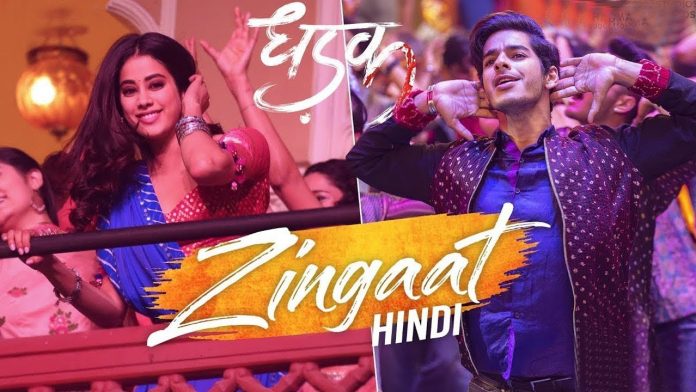 Zingaat is the latest song to be released from the Hindi remake ‘Dhadak’ starring Janhvi Kapoor and Ishaan Khatter.

The latest song is incredibly catchy in contrast to the title track – Dhadak Hai Na, which is a beautiful soulful melody. It will make you want to dance along instantly with the music, composed by Ajay-Atul, and sing along to it’s preppy lyrics, written by Amitabh Bhattacharaya.

The music video shows Janhvvi and Ishaan’s amazing energy levels, and shows us much more of the chemistry between the two characters. The dance routine they perform is very contemporary where you can notice the famous ‘dab’ included in the routine. Ishaan steals the camera in the video, and you’ll be hooked on the young star performing the energetic routine.

The rehearsal video of #zingaat!!! Watch the two of them burn the dance floor!!!!! #janhvi #ishaan #dhadak pic.twitter.com/UQc5E9kzXL

The song is remake of the Marathi hit Sairat, and has been adored by fans all over the world. Talking about the song, Ajay said: “We knew that Zingaat would become popular in Maharashtra because of its tempo, rhythm and catchy words. Also, the lyrics don’t have any double meaning.

However, we never thought that it would become so popular all over India, as well as across the world. We never expected it to be played at clubs in New York or on cruise ships in Singapore. The response was overwhelming.”

‘Dhadak’ is an official adaptation of Sairat – a Marathi film that was a surprise hit at the ticket windows and received wide accolades for the apt portrayal of caste divide in our society. Janhvi steps into the shoes of Rinku Rajguru for Dhadak while Ishaan takes on the role essayed by Akash Thosar in Sairat.

The movie is due to be released July 20th, in the meantime check out ‘Zingaat’ below.