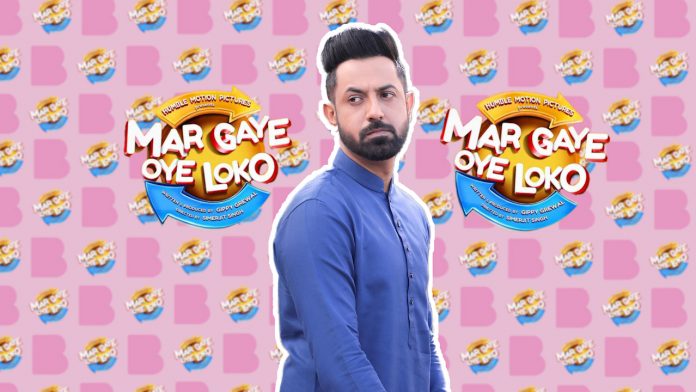 BritAsia TV caught up with Punjabi singer and actor Gippy Grewal to chat about his most recent comedy movie, Mar Gaye Oye Loko.

‘Mar Gaye Oye Loko’ is a Punjabi comedy movie with a unique twist. Gippy plays the character of Tittu, an innocent college boy who falls in love with a fellow student, Sapna Pabbi who plays Simrun. Unfortunately, Simrun does not feel the same for Tittu and instead ends up falling for Binnu Dhillon’s character, Gill. Gill is a local gangster who has a team of men, that takes away land from others.

In a strange turn of events, Tittu ends up being accidentally taken to the afterlife instead of Gill, who gets shot in a revenge plot. After a series of confusing events, Tittu is reunited with Simrun, who falls in love with him in the end.

On naming the movie ‘Mar Gaye Oye Loko’, Gippy told us that it fitted in with the theme of the movie, and justified what the movie was all about. He also said that the title is used as more of a comedy element rather than something daunting.

Audiences can expect a lot of laughs, a unique story line which was written Gippy Grewal himself and has kept the same cast from ‘Carry on Jatta’, which was a huge success in the box office.

Not only does the movie have a stellar cast, but the soundtrack for the movie features Guru Randhawa, Sidhu Moose Wala and Malkit Singh. Gippy believes that the music is a backbone for movies, and these big names brought a lot to ‘Mar Gaye Oye Loko’ including remakes of ‘So High’ and Malkit’s legendary, ‘Mar Gaye Oye Loko’.

We’ve seen Gippy play a variety of characters in his previous movies such as ‘Subedar Joginder Singh’, ‘Ardaas’ and ‘Carry on Jatta 2’, which shows off his versatility as an actor. The actor told us that he doesn’t mind playing different characters as long as its not repeated.

The Punjab native describes this movie as a family movie, with many elements that the youth will enjoy the most. We can expect a lot more from Gippy and Humble Productions, as they have 8 movies in the pipeline to be released in the next two years.

Find out more about ‘Mar Gaye Oye Loko’ and catch all the action from the world premiere of the movie below.